I really didn’t think running a half marathon was going to be that hard.  Really!  When Jodi and I decided we were going to embark on this crazy adventure, the possibility of failing never crossed my mind. Running 21.1km, to a newbie runner, sounds overwhelming.  It is a wonderful moment to be two weeks away from one of the most exciting child-like times of my adulthood and be able to reflect back on my running timeline.  I began training March 2012.  At that point, I never thought the day that I could run even 5km would ever come.  But, slowly and surely I committed myself to 3 runs a week.  At this point, it was more walking with run breaks than the other way around.  The first time I was able to run 3km was a milestone.  When my legs get lead tired and my motivation is depleted, I often think of my first run to my mailbox and back and miraculously I am able to put a little zip into my step.

Completing my first 5km felt like getting my heart broken for the first time.  It actually occurred in my first race in Kingston.  You see, this is where I learned never to trust my Nike app.  I had been running consistently and thought that I was doing tremendously well at increasing both in speed and distance.  According to my Nike app, I was running a 4 minute km!  The point of disillusionment came at the 3km mark on the course.  The 5km signal on my Nike app told me I was done the race, but I was only at the 3km mark on the course!  Those last 2 km were heartbreaking and I knew my relationship with Nike was over.  I completed my first 5km in 37 minutes.  At this race, I gained new respect for speed walkers!

Over the next couple of months, I focused on trying to balance work, my family (including my 2 wee girls under 3 years old), a house hold, dancing, writing report cards and running.  I wasn’t in love with running yet.  It was still very hard to get the motivation to run out the door.  At the Beat Beethoven 8K Run, I dropped down to the 4km option but did so in an impressive (and never experienced again) 21 minutes.  But, I was doing it.  I was increasing my mileage and very soon I would experience an awakening.

Sporting our Sole Sister tanks from the Another Mother Runner collection

I will never forget the early morning ride to Sydenham where I was running my first 10km race.  God love my husband as he put up with my constant chatter about pace, walk/run interval strategies and most importantly what capris I should wear.  Upon arrival, I experienced the new feeling of being absolutely scared out of my wits.  My longest run to date was 8km.  What was 2km more?  My support team was an absolute life saver as they pumped up my ego.  Never before had I experienced such anticipation and dread.  It was a real awakening as I fought my inner demons.  And, I won.  I ran a respectable 1:19 min 10 km for the first time in my life.  I learned three very important lessons at this race: wave and get out of the way of fast runners, get fitted for proper running shoes because it makes such a difference and don’t experiment with body glide and running shorts on race day.

I would rather skip my next reflection but with the good comes the bad or very depressing!  I Ran Gan was not my favourite race.  Nothing seemed to go right that day. I should have kept my flip flops on and headed straight for a pool and filled up my fuel belt with a Magarita!  Jodi had a horrible eye infection and I had food poisoning.  What’s a little bit of throw up and eye puss amongst friends?  Actually, I was so horribly dehydrated and sick that I dropped down to the 5km option mid race.  I laugh now because to think that I could even complete 5km at one point was literally a dream!  Also, I learned that I desperately hate those freaking fuel belts.  It bounced around and I was forever dropping all those little bottles.  Disney – bring on throw away cups.  Seriously, this race taught me the importance of listening to my body and the importance of water!  The best part of the day was relaxing at Jodi’s mom’s house post-race with our families.

The Toronto Women’s 10K Race has become one of my favourite races.  So much so, that Jodi has already convinced me to sign up for the second half-marathon of my life in May 2013!  I think it was the opportunity for some girl time that made this weekend so special.  Jodi and I escaped for some shopping at the Vaughn Mills Mall, the Disney Store and Lululemon among many others.  We so enjoyed a lovely relaxing dinner at an outside sidewalk restaurant downtown Toronto.  That night we acted like teenagers creating our tutus.  It was during this weekend that I truly realized how important it is to have a sole mate.  Having a BRF makes all the difference.  Jodi and I both realized why we are BRFFs: Jodi is an absolute stress case the night before a race, going all Type-A and getting everything in order.  I tend to be relaxed, trying to make my play list at about 10pm.  However, once morning hits, it is I whom is a mess.  I tend to have horrible nerves and actually get physically ill.  At one point, I jumped back under the covers and I laugh now at how Jodi handled it – “You have 5 minutes, K? K!” – and we were out the door.    This 10km Women’s Race was also very important because it was the first time we met some fellow Canadian Princesses-in-training met.  Penny, Tabetha, Laural, Jodi and I were that much closer on our journey to the Castle! 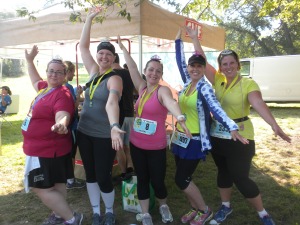 My family favourite race of the year was the Oasis 10km held at the Toronto Zoo.  Again, our families made a trip out of it.  The girls love staying in a hotel!  Dressed like zebras, my family was ready to not only support Mommy but run for the first time themselves!  I really earned my medal that day as the course was very hilly!  I did especially enjoy the monkeys, zebras and giraffes!  Poor Jodi; she ran too fast and missed them all – but hit a new PR!  I still have nightmares though about that hill at the 9km marker.  The Cub Run was so fantastic.  It made all the hard work and sacrifice worthwhile to see my husband and daughter race to the finish.  You see, my involvement in this sport encouraged my husband to set a goal of his own – to be one Tough Mudder.  And, it is so wonderful to see my daughters choosing a healthy physical activity that promotes mental toughness as well as healthy self esteem. 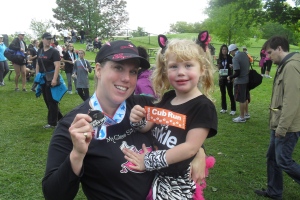 The most emotional race of the year was the CIBC Run for the Cure.  I was humbled by the strength of a vast number of women who walked and ran in support of finding a cure for breast cancer.  There was one woman in particular who truly does not realize how inspiring she is – Karen Logan.  For one thing, I don’t know Karen very well.  My BRF as you know, Jodi, called me up one night and told me to add one more race to our September schedule.  She wanted me there in support of her team, K.Lo’s Krew, running for Karen who was diagnosed with breast cancer this past spring.  And so, I ran along with my dear husband and two little girls to do just that.  This race made me realize how one person can make a difference.  Karen’s team raised over $40 000 in support of CIBC Run for the Cure.  I was so proud of Jodi for leading this team. And I am so happy to say that Karen is now cancer-free! On a more comical note, this was the race that Jodi and I both realized that our tutus were not going to make us “fairy fast”.  Little did we know, the costume drama was just about to begin…

September: CIBC Run for the Cure

A year ago, I never thought I would ever be able to say my name and the word Marathon in the same sentence.  Five fabulous and funky girls came together to race the Picton Marathon Relay and we sparkled all the way through 42.2 km of the county.  I ran the 2nd leg right after Jodi leading up to the entrance of Sandbanks Provincial Park.  The markers weren’t exact so my leg of the race was a bit longer than expected.   Even though it rained the entire time of my portion, it was an amazing feeling to be involved in something so much bigger then yourself.  This race introduced me to a whole new amazing world of runners.  Running is a solitary sport of which only you can put in the km. That day, l loved racing as  part of a team.

Showing off our hard-earned BLING!

On November 4, Jodi and I reached a milestone in our “Race to the Castle”.  We completed our final race together before the Princess Half-Marathon. I learned yet more lessons. Road Runner’s Races aren’t for me (you’ll have to read my blog for specifics – it’s worth it!).  I am not afraid of the “Balloon Ladies” anymore that sweep the Disney Princess Half Marathon.  Try running with a police car literally on your heels for 5km.  A balloon I can pop and don’t think it is beneath me to carry a pin in my belt!  Finally, two days before this race, my best furry friend of 10 years passed in my arms.  My yellow lab, Molson was my inspiration that motivated me to run that day in his memory.  This race was special to me too because it was our last one together before the Castle.

Overall, both Jodi and I agree that a great race includes a kid friendly forum, a fun venue, chip timed results (can you believe that I AM saying this?), stylish race swag, and most importantly – BLING!   Also, running to me is second to what I am wearing.  It’s more fun that way.  And while there has been much costume drama on the road to the Castle and alterations are yet to be made (that’s another blog!), there is only one more stop on our journey.

Disney Princess Half Marathon – I am ready for you.

3 thoughts on “So Close to the Castle”