This is the tale of one badass road trip!

By now you probably know that we love, love, love the duo behind Another Mother Runner, Dimity McDowell and Sarah Bowen Shea. I own the books. I wear the gear. I listen to the podcasts. I follow the blog. And I even got to meet them in person at Disney’s Princess Half-Marathon Weekend which sealed the deal – I am drinking their kool-aid by the gallon. 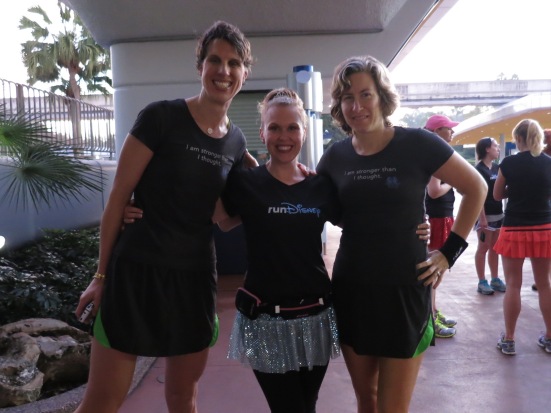 Not too long ago, I learned that when they are not appearing at expos and races, they look for other ways to connect with their readers. They host Mother Runner parties in cities where they happen to be running, speaking or otherwise visiting. A night out with other mother runners to talk about all things running – dealing with injuries, how to hydrate on long runs, what sports bras do the job, what races offer the best experiences, how challenging it is to carve out the time to run, to train, to set goals and chase them hard. And yep, it’s tricky because we are all juggling a few other things as well…like families, jobs and households. We are all time-crunched. And yet, we all get it. We all understand why you have to make the time, why it’s so important, why it’s so worth it. Like-minded people all in one room. Different ages, different shapes, different sizes, different goals, different abilities. No judgement. Just acceptance. How often does that happen among women?

Although I’d longingly read about these parties, I had never expected to attend one in person. These Chief BAMRs (badass mother runners, if you are not familiar with the lingo of the “tribe”) seldom make it north of the border. But then one day, while pouring over their monthly e-newsletter, I noticed they were coming to Albany, NY which is about 4 hours south of me. And an idea was born! Immediately I could recognize that it was either a) awesome or b) ridiculous.

Being a teacher, Princess Alana was not able to indulge my idea of taking a road trip in the middle of the week…but our honorary princess on the run, Laural, was all for it! A superfan herself, she thought the idea was definitely a) awesome. Validation! And so a plan was hatched: the Canadian BAMRs were heading south for some mother runner love! 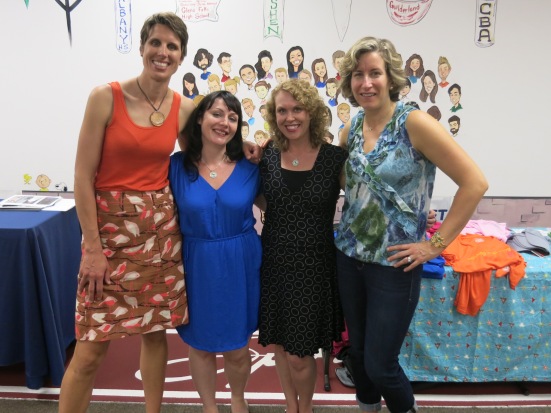 The party was held at Fleet Feet, a running store franchise that was exciting to visit all on its own. Runners love their gear so throw us into a running store and we are pretty happy gals. The first order of business was getting some Another Mother Runner gear. I have two of their tech tanks and love them. They’re comfortable and flattering and fun. This time, I had my sights set on one of their lifestyle tees because when I’m not running in one of their tanks on the weekend, why not run errands in one of their tees? Everyone had the same idea. Put mother runners in a room and basically, we can’t pull our credit cards out fast enough. It was a bit of a shopping-frenzy, but don’t worry: I got what I wanted. Laural made out with quite the haul as well. Success!

Also on the agenda: chatting with the authors, of course. We had run into Sarah before the party officially started and were thrilled to bits that she recognized the Canadian princesses right away! We could have talked her ear off, but we paced ourselves (somewhat) and let her get on with her party prep. Next up: finding Dimity. It was not hard to spot her, given that she towers above everyone in pretty much any given room, but it took some patience to have our moment with her. We’re all mother runners: we take turns, we play nice, we model the behaviour we’d expect from our kids at the park. And soon enough, it was our turn for a chat. She remembered us from Princess Weekend too! And she is in training for an Ironman! And how is that going, Dimity? And what about the new book? And thanks for asking about my last half-marathon! And actually, it was a bit disappointing – and how do you deal with race disappointment? And will you sign our books? That’s the other thing about mother runners. We like to talk. And we have a lot to say. 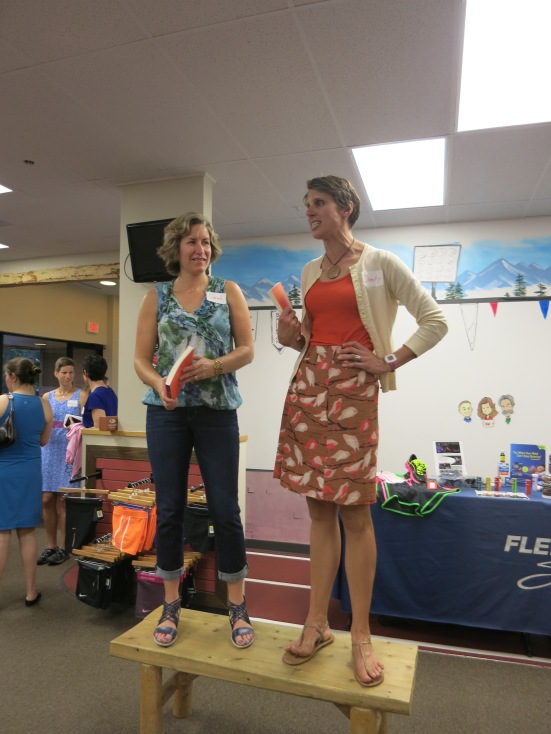 Next, it was time for Sarah and Dimity to do a reading from their book, Train Like a Mother. Given that I have read this book, say 100+ times, there should not have been anything new for me in this reading, And yet, hearing it from the authors and seeing the reactions of the group made it new. It was inspiring and fun and relatable – every single word.

It was made even better when the gals decided they needed an assistant for the evening and Dimity chose me to join them. I always was a teacher’s pet! They drew for lots of prizes which I got to distribute to the lucky mother runners. It was generous for them to indulge and include me in this way – sharing a stage with my running idols! (Note to self: next time, wear heels). 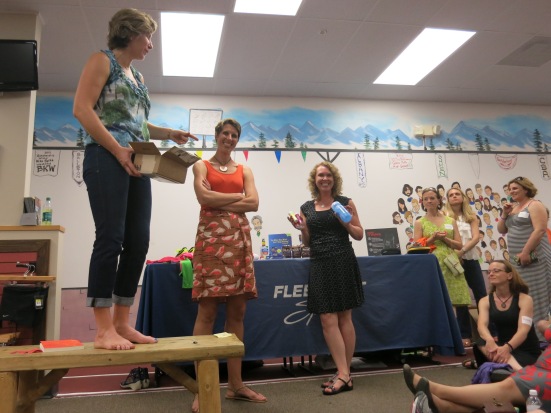 After their talk, Dimity asked Laural and I to give out the swag bags – of course, Dimity! We’d love to, Dimity! Now these goodie bags were pretty great. They included GU, Chomps, Nuun, running socks, nut bars, organic skin care samples and medicines and, my favourite thing of all, Nuttzo – an organic nut butter that is nutritious and delicious. Check out the loot I came home with: 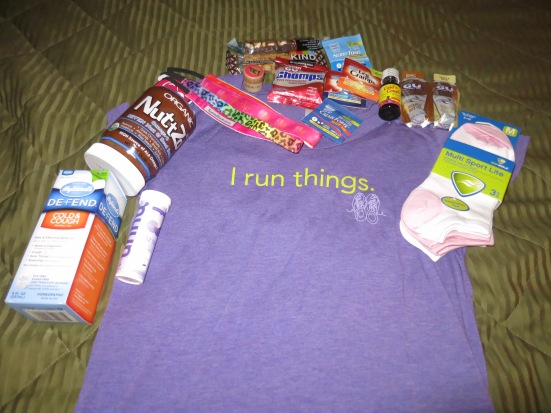 Being the eager litle helpers we were, we got to stay as the party ended and help them clean up. Now, you might think that mothers have enough stuff to clean up in their own lives without offering to help others with their stuff – but in this case, we wanted to help! It gave us more time to chat with them. We learned that they are planning to attend Disney’s Princess Weekend in 2014 and that they are hoping to add Disneyland’s TinkerBell Weekend to their roster. How awesome would it be to run for your Coast to Coast medal at the hottest women’s endurance events with the Chief BAMRs on hand? If you think it would be as awesome as we do, tweet runDisney and let them know you want to see the mother runners there!

And with that, we headed back to our hotel, enjoying many laughs on the way. It was so much fun to hit the road and take in this experience. It was a celebration of running and friendship. It reminded me of everything I love about this sport – it’s a solo venture, but you are never really alone. We’re all in this together, doing our best one mile at a time. 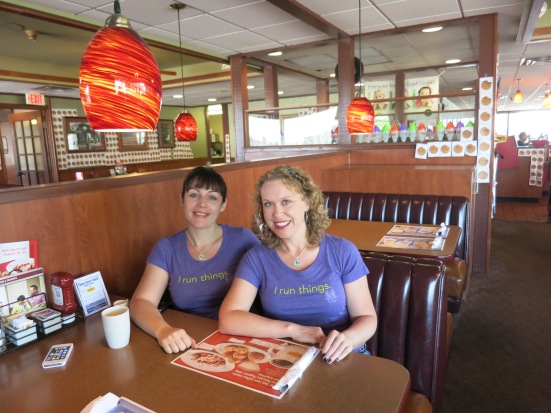 6 thoughts on “Inside Another Mother Runner Party”