So this happened last week:

Yep, these Princesses on the Run have thrown their names in the hat to run the Nike Women’s Half in DC! This was not in our plans or even on our radar. It just came out of the (Tiffany) blue. It started with a message from honorary 3rd princess on the run, Laural, who said she was thinking about entering the lottery which was about to open in a few short hours.

Initially, it gave me a good laugh. That Laural, always up to something! Between us, there is always a race plan being hatched (Alana now lives in constant fear of what’s coming next!). But then I realized we could easily do DC as a road trip. A long weekend. There and back, quick as a jiffy, with a Tiffany box in hand from one of the largest women’s endurance races going. A race so popular, I might add, that you can’t even register – you have to enter a lottery and be chosen. After all, this race series was on my Bucket List and I was literally in the process of choosing a spring half-marathon when Laural started the ball rolling to Washington, DC. Could this be it?

Well, what’s the harm? We decided that Fate would determine if this was meant to be. Somehow I had gone from thinking this was a ridiculous idea to becoming a Team Captain in a matter of hours! What can I say? I am either all in or all out, no middle ground. Sometimes you gotta JUST DO IT. This is a Nike race, after all – how could I resist using their motto to justify my hasty actions? 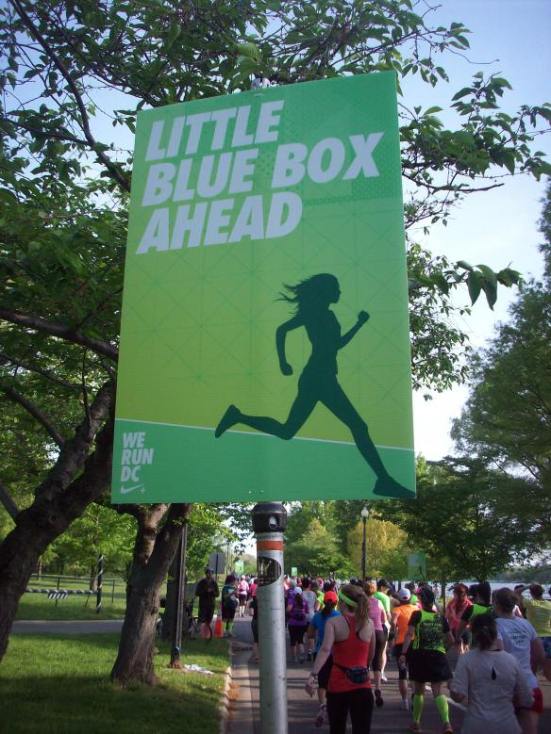 What makes a Nike event so special, you may ask? A few words: Tiffany finisher necklace. If that is not enough, picture firefighters in tuxedos on a red carpet presenting said Tiffany necklace in that famous little blue box. Think exclusive, beautiful finisher t-shirts. Make-overs at the Expotique. Girl power being celebrated en masse. It’s basically Lilith Fair for runners.

To encourage this spirit of sisterhood, Nike offers a team option in their lottery. Entering as a team simply means that you are either all accepted, or none of you are. It does not increase or decrease your odds in the random lottery. It just means that if you want to go with a friend, you won’t find yourself in that awkward position where only one of you are accepted. Laural and I immediately knew we would want to make this a Mother Runner Road Trip, so of course we decided to register as a team (Badass Mothers on the Run, in case you were wondering!). Whether we’re in Whitby, Ontario at the strangest race we ever did run, or running in costume through Walt Disney World, we always have a mother of a good time!

And with a few simple clicks, it was done. No idea what the odds are, or if they will be ever in our favour. Apparently, the odds to run the Nike Women’s Half-Marathon in San Francisco are about 1 in 5. Nike DC odds are said to be a little better, but no one seems to know if that’s fact or fiction. All I do know is the lottery takes place on December 6 and, if we get the coveted email from Nike that day, we’ll be running DC on April 27, 2014.

The day after we registered, I posted the news on our Facebook page and was thrilled to pique the interest of an old friend who decided to enter with us! I have known Stacy since I was a kid. We grew up on the same street and spent countless hours playing with Cabbage Patch Kids, Care Bears and Barbies. Although we now live a few hours apart, instead of just a few doors away, we love finding races we can do together whenever it works (like the Toronto Women’s 10K, pictured below). In fact, she just ran the 10K in Niagara Falls and cheered me on at the 17K mark and as I crossed the Finish line. We said goodbye that day with the promise that we would find another race we can do together. Who knew we’d find one so soon? 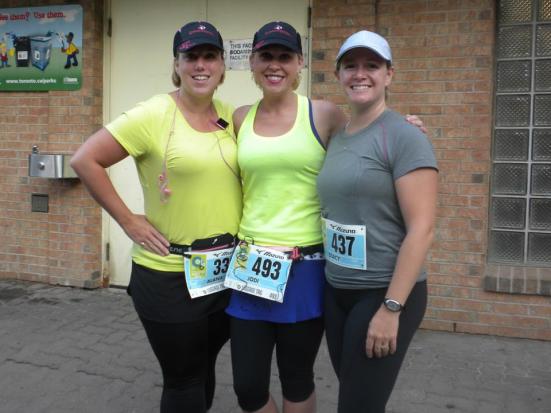 Finally, although she was slower to come around to this one, Alana didn’t take much convincing before deciding that she’d love to run DC too – and she then registered within the hour! I love the frenzy of excitement this race has already caused, each of us getting caught up in the mania one after the other! Apparently we’re all half-crazy. I guess if you are going to lose your mind, you might as well do so in good company – and that’s exactly what we’re in!

If the Badass Mothers on the Run are chosen, we’re on our way to rock DC. If not, I had some other options in mind for a spring half-marathon and I’ll pursue those plans. But for now, I’ll let those other ideas simmer quietly on the backburner until Nike lets us know if a Tiffany box is in our immediate future…

UPDATE: 2 princesses et al will not be on the run to DC with Nike. Apparently the odds were not in our favor in the lottery drawing! Team Badass Mothers on the Run will have to find a new starting line to covet this Spring. With so many races waiting to be run, we’re sure to find a great one – and save some money for future Disney races at the same time!

10 thoughts on “Just Do It: Entering the Nike Lottery to Run DC”