“Courage isn’t having the strength to go on – it is going on when you don’t have strength.” 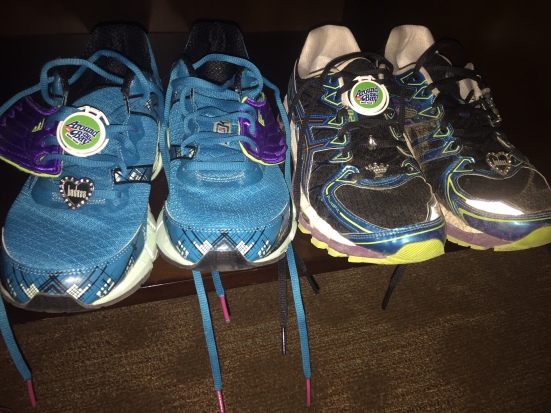 Around the Bay is a race that runners in my neighbourhood embrace. It is a legendary race. As I began running more, I was continuously told that I had to try this race. 30K? Not easy. 30K at the end of winter? Brutal. Little did I know just how bad this winter would be, both physically and mentally, when Jodi and I decided on a whim to sign up and run The Bay. It was December and the grass was still green. Long runs were still outside and there was a Christmas special where you would get a free running hat with registration. We love swag. We love a good challenge. We went for it.

Then winter came screaming in. I’ve alluded to it in a previous post, but I really struggled this winter. For me, depression and anxiety are a reality that I face. Running is my strength. It’s what keeps me off of the anti-depressants and anti-anxiety meds that I hate taking. A healthy diet with regular doses of endorphins work for me. But this year that combo just wasn’t happening.

They say bad things come in threes. For me, it started with a car accident, continued with an employee quitting and not only doubling my workload but questioning my management skills, and continued with a scary diagnosis for my son. Running just didn’t happen. It was cold outside. I didn’t want to hit the treadmill. The gym scared me. All excuses, yes. But I could feel the waves of anxiety rolling over me. The “I cans” were replaced with “I can’ts”. 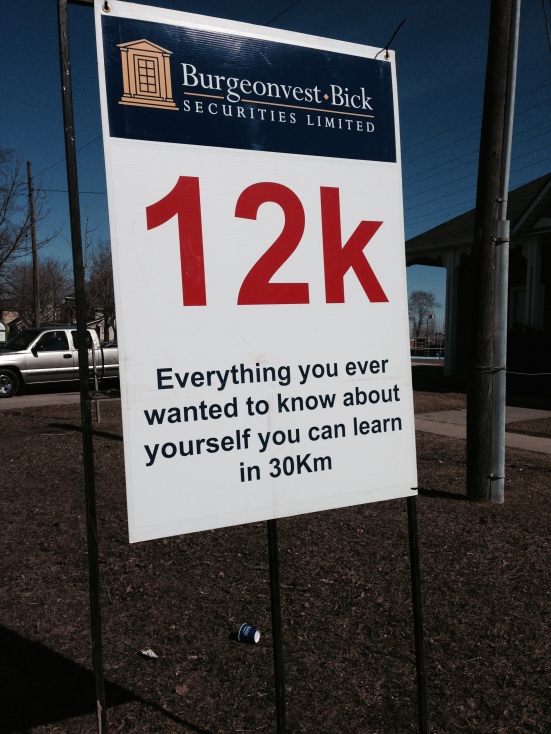 One day, as I sat in my doctor’s office discussing my son’s diagnosis and how to manage it, she said, “Let’s talk about you. I think you need to consider medication.” She was right. I wasn’t sleeping or I was sleeping too much. Everything made me cry. And, I felt like all the work I put into being a runner, and all the courage I’d found to fight these demons, was just gone. But, after telling both Jodi and my coach that I was struggling, I decided I had to keep running, and at least try to train for Around The Bay.

Forget the long runs being painful. Just getting my sports bra done up was daunting. My short 2 mile runs felt like a death march. I went out for one training run with my running group and every time I was away from the group, I’d start to cry. It all seemed too hard.

But, thanks to a determined BRF who reminded me I had to train, and a coach who understood what was happening, I knew I had support. One short run led to another. And then the long runs started. I have no idea how I cranked out that first 10-miler. Well, I do: I got on the treadmill and messaged Jodi every mile because I knew she was doing it too. Another Sunday, I went to watch my coach run because I seriously needed the inspiration.

As Around The Bay approached, Jodi (who was also struggling with a long, cold winter and those endless treadmill runs) and I kept going. Through it, she was my strength and my cheerleader. We commiserated over distance, treadmills and chafing. She didn’t let me quit because we were running this together. I had to be ready because I knew she would be. I started to gauge my runs by my happiness levels. When I cranked out a half marathon on my treadmill, it was brutal, but I finished it smiling. I figured I could do this race. I didn’t feel strong, but I knew I’d get through.

A week before the race I had a phone call with my coach. I’d shared most of my struggles in an email. He kindly didn’t express any doubts, just told me he believed in me. And then he gave me the best gift ever – a team jersey.

To say Around The Bay weekend was insane is an understatement. Plans changed at the last minute as Alana (who was there to run the relay with 2 friends) had to leave due to an emergency, and I ended up coming to the hotel the night before the race. Jodi had been up almost the whole night before this with Alana. She was overwhelmed, stressed and sleep deprived, and worried about tackling her longest distance in less than ideal circumstances. On top of this, the weather for the race was not looking great and it was hard to know how to dress. After trying on many, many variations of running gear, we decided on approximately 25 layers of clothing. We needed approximately 2. (However, the laughter associated with this scenario was probably just what we needed – and come on now, are those hats worth it or what?) 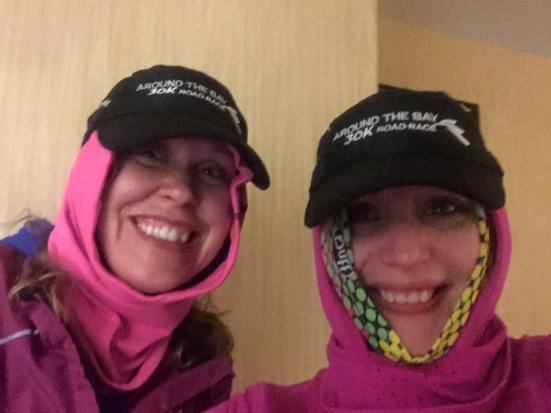 Fully bundled, we went to the start line. We lined up. We started our watches and our music. And soon enough, we were off and running. The race itself was … something. Highest of highs. Lowest of lows. Adversity. Triumph. Pain. Pride. A feeling of being so alive.

The amazing part? I loved it. We decided from the beginning to run together, and take it slower to pace ourselves for the distance. We weren’t running for a certain time on the clock; we were running to finish this beast of a race. We thought it would be a survival run. We planned for 1 minute walk breaks with each kilometre marker, which felt surprisingly easy. The weather wasn’t as bad as we anticipated. Expecting it to be a struggle, we were unexpectedly loving every step. We were lucky enough to have a friend at the 10K relay mark, so we stripped our excess layers and kept going. We didn’t talk a lot during the race, but there was a lot of “is it me, or is this just a beautiful run?”. Strong, fearless, happy miles. I’m so incredibly grateful for that first 20K. With every step, I remembered how awesome this sport is. As we go through the pictures, all you can see are smiles. 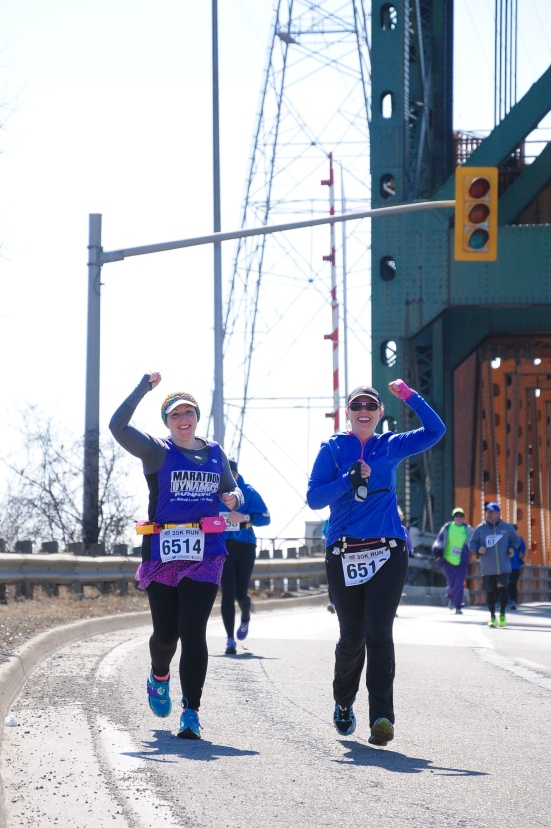 Around 20K, things changed a bit. A 30K race is a beast. It hurts. I’ve done this distance enough to know this. When we hit 21K, it became a bit of a struggle. Usually when we run, Jodi is the strong one. We have pretty similar paces, but I can only think of one race where I was faster than her. And much of that is because she’s so determined. That’s something I love and admire about her.

This race was a bit different. I knew the pain of 30K, but it was new for Jodi. With rolling hills and harsh winds, on such little sleep before race day, I recognized that Jodi was having a tough time rallying mentally. She told me the mental monkeys were screaming in her head. Much like my first 30K, she was hitting a wall. I made it clear that we were finishing this together. 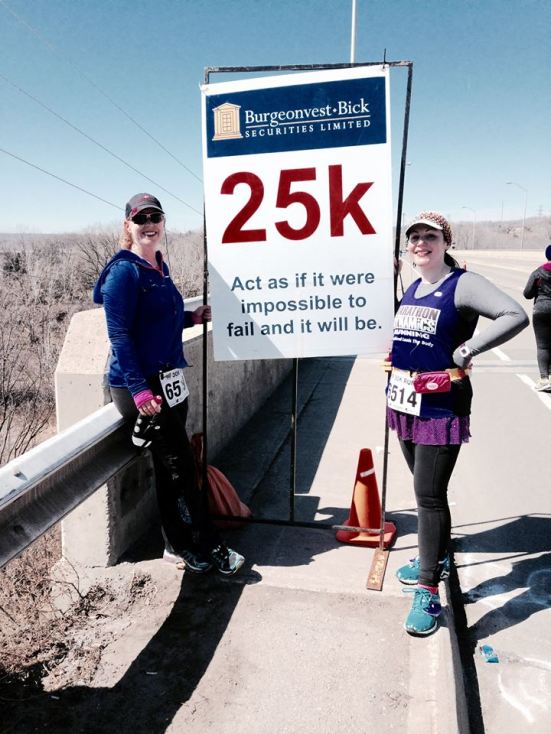 And then I did something I rarely do. I took out an earbud and I started talking. I told her all the stuff that I love about her. I reminded her of her strength as a runner and a person, and as we made our way through a long, hard 10K, I felt something that I haven’t felt in ages: strength.

As we ran, we drew strength from each other. As each step, then each kilometer, went by, I was motivated by her strength, and her willingness to let me take the lead and be the one to worry about what was coming next, just like she had been for me all winter.

For months I’ve felt like a weak link, just struggling to get through the days. And, on race day I felt like Jodi saw my strength, and believed in me, so I could believe in her. And for that I’m so incredibly grateful. 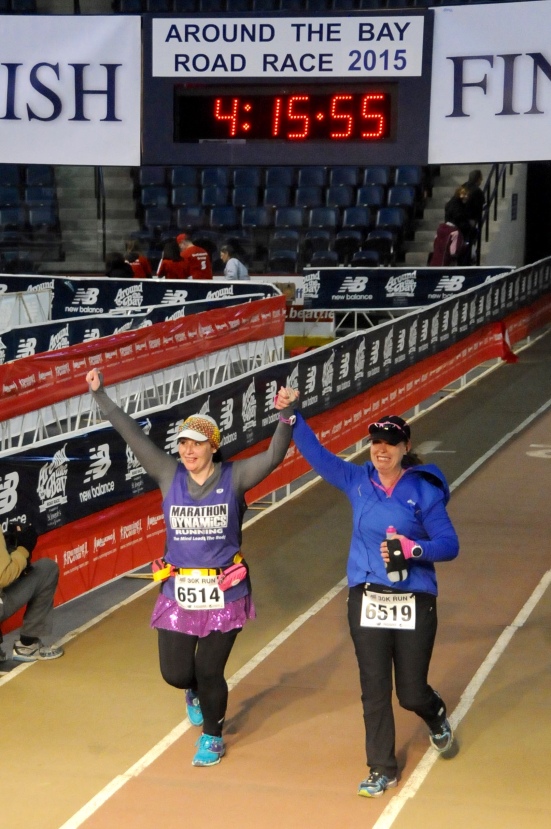 As we finished the race, hand in hand, we were both crying. For me, it was because I was so incredibly relieved that the person I try so hard to be was finally back. It just took one really hard race and a very trusting friend to help me find that.

That’s something that no race clock could ever measure. Not only did we do it, but we did it together. Although we attended the Expo separately, we both purchased shirts that read, “Sole Sisterhood: Friends to the Finish”. And that really become our motto. All the way. Around the Bay. 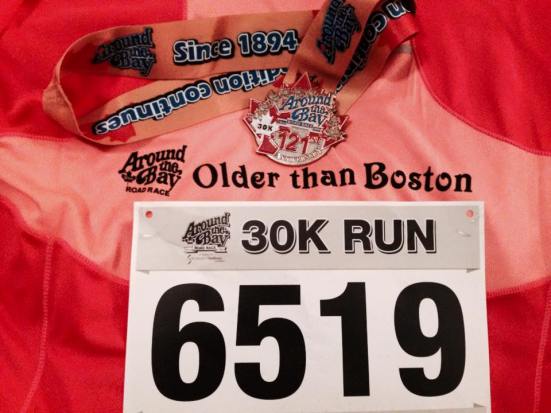 *Just like the race, we worked on this post together. Although it comes from Laural’s perspective, there is a lot of Jodi in here too!